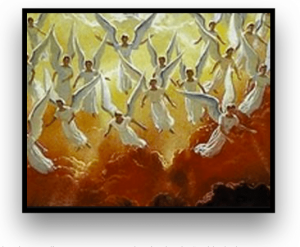 Were you there? According to Job and his description and likening of the creation and the birth of the Savior you were there. He said, “who laid the cornerstone (Jesus Christ) thereof; when the morning stars sang together and all the sons of God Shouted for joy?” We were “all” there! (Job 38:6-7)

You often hear the phrase, “worship together” and I wondered what that exactly meant. We don’t talk together, give lessons together as a congregation. While in the Missionary Training Center I remember singing “Praise to the Man” as a very large group and feeling the spirit and knowing that the words I sang were absolutely true. It was there I discovered true worship. We do “worship together” when we sing together as a whole, the same words. The other time is when we all say amen together after a prayer.

When have you felt you were truly worshiping?

Suddenly there was … a multitude of the heavenly host praising God.  ~ Luke 2:13