Joseph legally claimed Jesus as his own when he named the child. ~ Isaiah 7:14 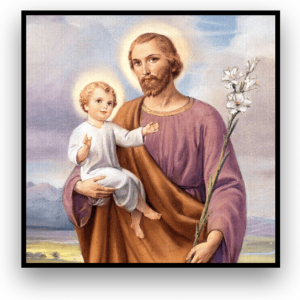 Joseph was the patriarch of Jesus’ home. He had Family Home Evening with Jesus and his brothers and sisters. He taught him a trade, told him stories, encouraged him to walk, talk, read and sing.

Years before Joseph took a hard question to the Lord. It may have gone something like, “Father, the woman I’m engaged to is now with child and it is not mine. What do I do?” Life can give us hard questions with no easy answer.

Gabriel shows up and brings him comfort. Jesus is at the center of this story too. He tells him to go ahead and marry Mary and name the child Jesus. But he did not give him all the answers. They began to unfold throughout the next months. Elizabeth has a special son, the shepherd shows up at the birth, foreigners bring money to help pay for travel and schooling. Joseph steps up to his role as a faithful, loving stepfather who protects, instructs and wonders at God’s Son.

When Jesus is at the center of our lives we can forgive, be at peace and move ahead in faith even when we have hard questions.

Why would the angel give the name of the baby to Joseph? Perhaps it was a way of saying to adopt the baby as your own. In their culture when a father named the baby at the temple it was saying he claimed the baby as his own. Gabriel gave him the name of Jesus, meaning “save his people” and fulfilling the prophecy of Isaiah, “call his name Emmanuel” (Isaiah 7:14) meaning God with us. Jesus means “God is here to save us.” and Joseph loved him as his own.

Joseph was told to flee Bethlehem and go into Egypt and he immediately rose and took his family and left, he was righteous and obedient.

Have you noticed the similarities between Joseph of Egypt and Joseph of Nazareth? Rebecca Stay wrote up her thoughts on this:

There is no scriptural record of any words spoken by Joseph, yet his righteousness and reactions to Mary’s condition bear testimony to his belief in Christ’s divine sonship.

Joseph put Jesus at the center of his life and lived in peace, move ahead in faith even when he had hard questions. We can too.