This is my story of struggle, bullying and overcoming. If you have learning and low self esteem trials then this story is for you. By listening to my story I hope you’ll gain hope and confidence in overcoming your issues and coming out on top with strength to help others. I truly believe our trials are given to us to make us stronger and so we can help others. Join me as I tell you the story of how God lead me to recovery and true joy and freedom and how he can do the same for you.

This is a hard story, maybe because it was the story of my son and our failures. It took me awhile to decide to record and then more time to release it. I pray that it can help someone or to inspire them to overcome their tough situations.

When I asked Izaak if I could interview him about his homeschooling experience. He said, “I was a failure, why would you want to record that?” After we talked about the possibilities, he came around and was very interested in sharing. He is a natural talker, as you’ll be able to see in the interview. He is raw and shares he’s struggles openly. He knows that by showing himself as he really is, is healing for him and hopefully for others

Izaak begins his story by telling of all the wonderful projects we did together in homeschooling. He admits that he did not start to read until he was 18 years old. He loved writing and would get frustrated that he couldn’t spell, but kept doing it. He chose to go to public school to learn to read and attend choir in junior high, but it turned out to be a bad experience. They couldn’t help him with reading and the teachers were treated terrible. He stood up for them and then he became the brunt of the jokes.

One of the greatest things that happened was he spent a summer with his Grandpa Garrett in New Mexico, he learned obedience and small engine repair.

He attended some classes in public school but was always behind so he dropped out.

The question on his mind was, “Why did the school system fail me? And so many others?” He began his research and started sharing it with others. The side effect was that his reading improved. When he would post things he learned people got made about his grammar and spelling and he couldn’t understand why they weren’t getting the message. He needed to be understood so he put his time into learning to spell.

Later he had the desire to attend college, but didn’t think he’d qualify. But he worked on his transcript anyway. He discovered he really had done a lot and had learned almost as much as he would have needed for high school. I remember him looking up at me with tears in his eye, “I really am smart! I always thought I wasn’t. I didn’t remember how much I really did do.” He decided on Pathway and began what he calls his journey back to God. Within that year he learned to read and write at his level because he added God into his studies.

He offers a few tips at the end of his story.

Izaak is a homeschool graduate, top salesman and college student. He went from thinking he was stupid in high school to believing he could be anything he wanted to be. Come hear his story.

If I had to describe myself in one word it would be visionary. Always thinking about the future and planning for it. Lehi, Nephi’s father, was called a visionary man. I 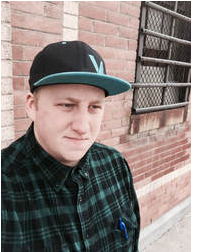 relate to that, not that I see crazy visions about the future but I am always creating visions in my head. Ever since I was a small boy I had a passion for film.I’m still a kid that dreams big and makes my goals a reality. A wise person once told me, “if you can see it, you can be it.” I know I can be the person that God wants me to be. I act with my visions and create what I set out to make! Right now I’m learning to be a video producer. I’m currently attending BYUI earning a communication degree and I’m married to my beautiful wife, Toriann.